Salomon Kalou was notably absent in Borussia Dortmund’s draw at home to Hertha Berlin on Friday last week. A goal from Pierre-EmerickAubameyang in the 80th minute was enough to ensure that Dortmund levelled the scores and came away with a draw. 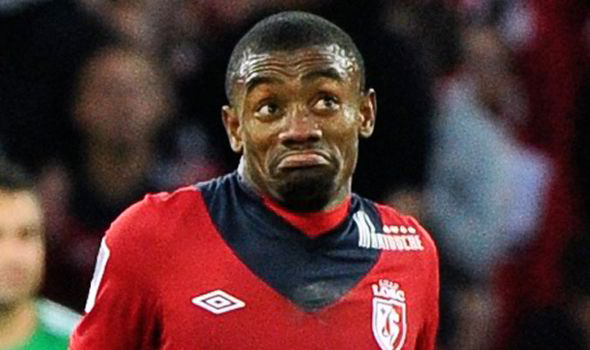 This came on the heels of a previously missed penalty by Aubameyang. On the other hand, Hertha Berlin’s Valentin Stocker made sure to silence the home crowd after slotting in a sensational back heeled pass sent to his direction from Vedad Ibisevic at close range.

Valentin Stocker was later sent off at the final minutes of the game after a dangerous tackle. The same also happened to Dortmund as Emre Mor was also dismissed for having pushed an opponent.

Thomas Tuchel’s side, who played host to Hertha Berlin, were not able to get a win against their opponents. Dortmund have been recently plagued with injuries which saw almost a dozen of their players absent due to injury related issues.

Notable amongst them is Andre Schurrle who celebrated Aubameyang’s goal on Instagram. This draw means Dortmund have so far gone two consecutive games without a win. Their last game with Bayer Leverkusen ended in a loss just before the start of the international break.

A cut back by Ousmane Dembele came on time to reach the Gabon international who slid at the far post to ensure that the ball found its way well into the back of the net.

“We struggled for a long time against a disciplined and tough defending opponent,” said Dortmund coach Thomas Tuchel, who due to injuries plaguing his team, had no other choice than to field a starting 11 with an average age of under 23.
“The equalizer was in the air for some time. It feels as if we should have deserved to win,” he said.

Saloman Kalou’s old team-mate at Chelsea Didier Drogba insists it is not just luck that he keeps on to plague the Gunners, after finding the net against the Premier League giants for the MLS All-Stars in the friendly match in July.

The Ex-Chelsea forward, Drogba netted on the stroke of half-time to bring back the All Stars to 1-1 draw level but it was not enough as Chuba Akpom made it 2-1 late in the game to seal an Arsenal victory on Thursday 29th of July.

That happened to be Drogba’s 16th goal in as many appearances against Arsenal, having tormented Arsene Wenger’s men throughout his time at Stamford Bridge, London. If you’re going to have a bet on football, Drogba scoring against Arsenal seems to be a pretty safe one!

When he was questioned if he feels fortunate to constantly find the net against Arsenal, Drogba responded: “I don’t know, I don’t know, I want to say that I’m lucky but when you score 16 goals against a team I don’t think it is luck anymore.”
Meanwhile, the Ivory Coast international was left in disappointment due to the 2-1 loss despite it being only a friendly fixture.

“I want to help my team to win games. And I always say that the goal that I score and then we lose, for me that doesn’t count,” the Montreal Impact striker said. For me it’s for fun because I scored against [former Chelsea, now Arsenal goalkeeper] Petr [Cech], but the result matters more than my goal or my own performance. It’s a bit disappointing to have lost this game in the last minute.

The 38-year old tested former Chelsea team-mate Cech early on, and had another shot blocked before he eventually found the net in the opening period at the Avaya Stadium in San Jose.

“He has always harmed us, and he continues. He’s a winner and I think that he’ll be like that until the end of his life,”

Wenger said about the striker. “At half-time, I was thinking ‘He’s still haunting us, even in the United States!’ Drogba is a typical poacher of a goal. He can do that in the box. When I see him in the box and fighting with young defenders I always think that now there is danger there because you know he will get the upper hand and score you a goal and that’s what he did.”